Gabriel Kamhi (the son of Rafael Kamhi who was hidden with other family members in Kryoneri during the German occupation in World War II) took his time to document his fathers family story:

“I, Gabriel Kamhi, a descendent of the Kamhi family whose origins lie in the city of Monastir (in north Macedonia), to which they came from the city of Toledo, Spain after the expulsion by the catholic kings. 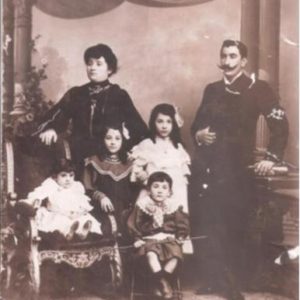 Yehiel and Rebecca Kamhi with their two daughters Victoria and Frida. On the bottom left is my father Rafael and on the right his brother Abraham (Monastir 1906).

The family stories and tales through generations delivered strong messages of the importance of family and its protection in case of danger. These stories taught me important lessons. After the Balkan War, the Serbs took over the city of Monastir and closed the free passage to Greece. The trade with Thessaloniki was stopped and Monastir suffered an economic recession.

My grandfather Yehiel was looking for a way out, and along with my aunt Victoria went to search for their luck in Athens. They settled there to prepare the ground for the arrival of the other family members. Meanwhile, World War I broke out and the border was finally closed. The family in Athens made great efforts to obtain a permit to leave Monastir.

My aunt Victoria had ties to the Queen of Greece seamstress, who was the sister of the German Kaiser Wilhelm II and, through her contacts, managed to obtain the long-awaited permits.

It was in 1915 when a German soldier showed up at my grandmother’s (Rebecca) house with documents.

My grandmother and those around her did not understand his language and did not know what he wanted. He, who couldn’t explain the purpose of his visit, left the place. The same day, Grandma told the story of the arrival of that soldier to one of her neighbors, which suggested that they might have been the long-awaited exit permits from Monastir. 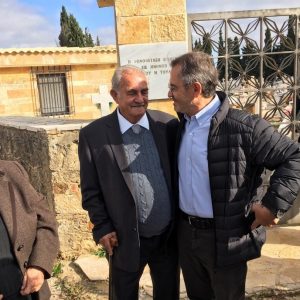 Immediately at that moment, my father Rafael, who was only 12 years old at the time, was sent to the town center to try and locate the soldier. After searching, running and running, he found him. Unable to talk to him, he shrugged and managed to bring him back to my grandmother’s house. With the help of the neighbors who were able to understand and translate his words, it turned out that these were the exit permits from Monastir, but to their astonishment the validity was only forty-eight hours. In the short time they had loaded everything they could on a wagon. They began their journey towards the border and on arrival, thanks to the permits they had in hand, the border was opened for them and they arrived to Florina and from there took the train to Athens and connected with my grandparents. The family settled in Athens.

This was not the end of the story of the family’s hardships. In 1940, after Mussolini’s failed invasion of Greece through Albania, the Germans invaded Greece.

In 1943 the Gestapo representative in Athens sought to convene the leaders of the Jewish community in the synagogue and demanded that Rabbi Barzilai prepare a list of all the city’s Jews. The rabbi gathered the Jews and told them in the Ladino language “vos fuites todos”, which means “all to flee”. As a result, the family again had to disperse. Some hide in Kryoneri a village on the Peloponnese (formerly named Matsani), some hide in Athens and elsewhere. The only family that did not run away and did not hide was my aunt Frida’s family, who thought that because she was carrying a Spanish passport, they were immune to deportation. The bitter result is that she ended her life in the Bergen-Belsen concentration camp, along with many of the Jews. Our consolation is that her daughter Laura survived, she is 94 and lives in Jerusalem.

Going back to Kryoneri, my family (My father Rafael, his brother Abraham with their children Yehiel Jr. and Rivca, and their parents Yehiel and Rebbeca Kamhi) was hidden by Athanasios Dimopoulos and his family under the protection of the priest Nikolaos Athanasoulis. Under his personal protection the family could survive the war and return safely to their homes in Athens when the war ended.

From time to time (17 times) the village was visited by German patrols searching for partisans and Jews which might be hiding. They stayed days in the village searching from house to house and checking the documentation to find people that don’t not fit there, like a Jewish family.

Meanwhile, when the lookout in the observation post saw a German patrol approaching to the village, he gave the notice and the church bell ringed announcing that the Germans are coming. From that moment on, all the men that could be associated to the resistance ran to hide in the mountains, taking with them the Jewish family to hide in a cave in the mountain, in which they could spent several days in very unfavorable conditions, but most of all fearing from the knowledge that if they are found by the Germans, whether by searching or by betrayal of a local, they could be sent to the death camps in which Jews were exterminated by an industrialized process: factories of death. This was the first time I became aware of this feeling of horror, realizing why my father never told me about his horrendous experience.

At the end of World War II, the brothers dispersed again. Uncle Abraham, his wife and their two children Yehiel and Rivca immigrated to Israel. My father Rafael emigrated to Chile with his wife and my sister.

In Chile he met his sister Jenny, who married Enrique Assael in the 1920s, also of Monastir who emigrated to Chile at the 20’s and was spare from the horror of war. In Athens, Victoria remained married to Salomon Kamhi, a monasterly too.”