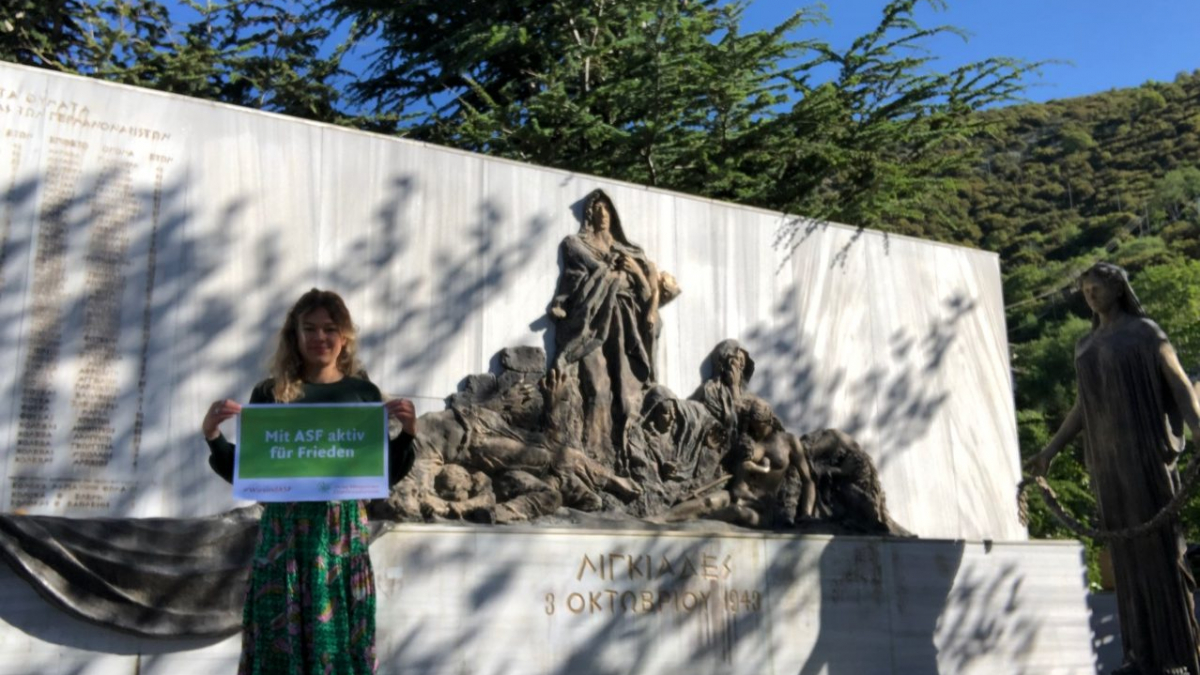 Ioannina is the capital of the northwestern region of Epirus with more than 100.000 inhabitants. The city was and is a center of Romaniotic Jews. They are Greek-speaking and their ancestors lived in Greece since the Hellenistic period. Since the 9th century there has been a Jewish community in Ioannina, which numbered more than 2000 members before the German invasion of Greece.

Kehila Kedosha Janina – the Jewish community of Ioannina – is alive and active to this day. It operates a synagogue and a museum and offers a variety of cultural and religious activities.

Above the town on a mountain range lays the village Ligiades, also known as the “balcony” because of its location. On October 3rd in 1943, the inhabitants of Ligiades went to the mountains to harvest walnuts. Back in the village mostly children and elderly people remained. In the afternoon, the first Division of the German Wehrmacht raided the village and carried out a massacre among those left behind. According to eyewitnesses the village burned for the whole night and the smoke could still be seen in Ioannina days later. Only the school and the church were not burnt down, which is the reason why the cultural centre is located there today. The Germans killed 82 residents, including 34 children under the age of 12 and only 5 people survived the massacre. They destroyed and burned the houses and made the survivors homeless. The Wehrmacht cited an assassination attempt by partisans on a German officer two days earlier as a pretext. German officer two days earlier. Lingiades is visible from everywhere and was probably chosen for this reason. Ligiades is just one of many Greek villages where brutal war crimes were committed against the civilian population during the German occupation. Today it belongs to the Association of Martyrs’ Communities in Greece. There is a memorial in the village where wreaths are laid and the names of those murdered are read out every year at a ceremony on 3 October. In the evening the documentary film “To Balkoni” will be shown for those who are interested in a small museum, which is runned by a cultural association and used as an educational place for seminars. The documentary film “To Balkoni” commemorates the victims of the Wehrmacht crimes.

Work in Ligiades:
Supporting the cultural association at events
Accompaniment of seminars and educational days with school classes or other groups
Presenting the documentary film “To Balkoni”
Help with the digitization of the historical archive of Ligiades
Assisting with the development of the Ligiades Museum and Cultural Center

The volunteer should be a communicative, historically-politically interested person. We expect respect, openness and interest towards our confessional partners in the Jewish community. A part of the work can be to accompany visitors and groups – this requires someone who likes to speak in front of people.

“When I first got to Ioannina, I was not quite sure what to expect, since the projects I was told about were just starting to take place and so there were some organisation issues that still had to be solved. It took some time to get used to the new environment and to get a solid working schedule, so in the beginning I found myself being confused and sometimes frustrated but after a short while I started taking part in various projects. One of my main purposes here is to exchange cultural differences. Thus, I started giving German lessons twice and English lessons once per day, from Monday to Wednesday. But other than that I include information about traditions and general culture, to not only focus on the language but to create diverse conversations. On Thursdays and Fridays I spend my time in the office of the Cultural Center, where I research, write and publish articles for the website about the Jewish community of Ioannina and Ligiades that I am currently working on.
Another project that I am currently working on is creating an interactive tour around Ioannina, featuring the most important parts of Jewish history there. Right now, the synagogue in Ligiades is closed for renovation, so there are not many activities taking place there. But I am really looking forward to explore this and other places connected to my work in the future. Further than that, I am very motivated to learn and also educate others about the history of Ligiades, because during some conversations with the locals, I noticed that not many of them know about its historical context. I feel like there is a lot of international apathy towards this issue and I see it as crucial to spread more awareness, regarding the political as well as the historical context connected to it.

In conclusion, I am very happy to be here and to be part of this project. Ioannina is a beautiful city and a great place to make long lasting experiences. Despite feeling a little bit lonely during the first weeks, I have made quite a few friends now and acquaintances, that I am getting along with well. The other volunteers and I also meet up regularly and it is good to have people to share your experience with. In addition to that, I have been taking Greek lessons for a few months now, which helped me a lot so far. Learning this new language is something I enjoy a lot and I am very glad to see a huge progress so far. I am looking forward to making even more memories, like exploring more of the country and getting new skills along the way.”

Report by the second ASF volunteers Yanes and Konstantin

The start in Ioannina was a bit bumpy. We were already informed in advance that the programme with the programme with the refugees was temporarily suspended by the municipality. On the way, it was explained to us that this was why we were both visiting the village of Lingiades and in the Jewish community of Ioannina. On the first evening we went directly to Lingiades, where we met Giannis, the president of Lingiades. He explained to us what our tasks would be and gave us the keys to the cultural centre. Our office is located in the cultural centre, which was originally the school of the village.

In Lingiades we are mainly working on the website, which is currently still offline. In addition there is a documentary film “To Balkoni” (The Balcony) in the (The Balcony) in the cultural centre of the village,
which deals with the massacre and the memory of it. We are supposed to show this when study groups, e.g. pupils or interested people come there. The name alludes to the location of the village, as it lies like a balcony over Lingiades and probably also the reason for the terrible deed. Unfortunately, the village cannot be reached by public transport, which is why we were therefore driven up by the police at the beginning. However, after the second time we got the the message that the car that was supposed to take us up was broken. Since then we have been working on the website from home and only go up on special occasions. Panos of Filoxenia is in talks with the mayor of the town to organise a new programme.