The “Righteous Among the Nations” award

More than 26,000 people around the world have received the prestigious award, including more than 335 brave Greeks.

Two o’clock in the afternoon, in the village of Kryoneri in the Peloponnese, 120 km west of Athens. 74 years after the liberation of Greece from German occupation, two “Righteous Among the Nations” awards will be granted on this occasion – one to the Rev. Nikolaos Athanasoulis, who saved the lives of Rivka Jakobi and her family in 1943-1944. And the other to the man who hid them in his house, Athanasios Dimopoulos.

Dimitris Dimopoulos (82) and his brother Giorgos (88) were children when their parents vacated the family tree house to accomodate the Kimhi family. Their family moved to a smaller room next to the tree house. Dimitris still lives with his family in a renovated house. Today they will receive the “Righteous Among the Nations” award in the name of their father.

“Back in those days, I would take Rivka and her family to the cave where they hid when the Germans arrived,” says Giorgos. “They would stay in the cave for a day or two, until the danger passed. Then, a child from the village would be sent to the cave to tell them that it was safe to return to the village.”

Rivka talked with the village’s current pastor, Panagiotis Theodorou. “The spirit of the Rev. Nikolaos has remained with us to this day”. Rivka told him in Greek.

She also told him how, one night, when she was very ill, her mother refused to take her to the cave. “She insisted on staying home with me. That night the Germans came to the village to search for the partisans’ weapons that were hid in the village and burned the barn next to the house. I remember standing at the window and seeing the barn burning down.”

“True”, confirmed Dimitris. “Your mother and grandmother ran to the water spring with urns and all the pots they could find in the kitchen to bring water, until they managed to put out the fire. Half of the barn burned. If the Germans knew you were Jews, they would have burned down the whole house. By the way, we renovated it just the way it was.”

Rivka added: “I remember a German came into the house and asked my mother what she was doing there. He saw she didn’t look rural. She told him I was sick. He looked at me, then touched my forehead. I saw in his eyes that he did not believe her, that he recognized us for who we really were. But he signaled to his friend that there was nothing to look for in there and they both went away. Even in hell, there was a German with a good soul. He did not betray us.”

It seemed that the small and secluded village, which during the war was called Matsani, has not changed in recent years. Those little houses were still surrounded by flowers, narrow alleys overlooking fields and mountains, and a greenhouse. The tavern and one grocery store are also there, although they are closed most of the day. The water spring that provided water to the residents during the war is still bubbling in the center of the village. However, its area has been significantly reduced after the water supply network was established, but occasionally people still approach it to fill their water bottles.

The residents make their living mainly from growing grapes for raisins and olives for olive oil, just like then.

As they start to gather in the small plaza next to the local cultural club, dressed in their best clothes, they are warmly greeted by Israeli and Greek flags, fluttering side by side. People are also coming from nearby villages: seniors, Rivka’s friends in the improvised class during the war and young people who have heard about this exciting story from their parents.

Some high officials are also here: the Israeli Ambassador to Greece, Irit Ben-Abba, the German Ambassador to Greece, President of the District, District Police Chief, Priest. Everyone comes to meet the little girl their parents saved, who immigrated to Israel after the war, was in the nucleus that founded Kibbutz Gonen, where she met her husband, Benny, established a home with him and together raised ten children. 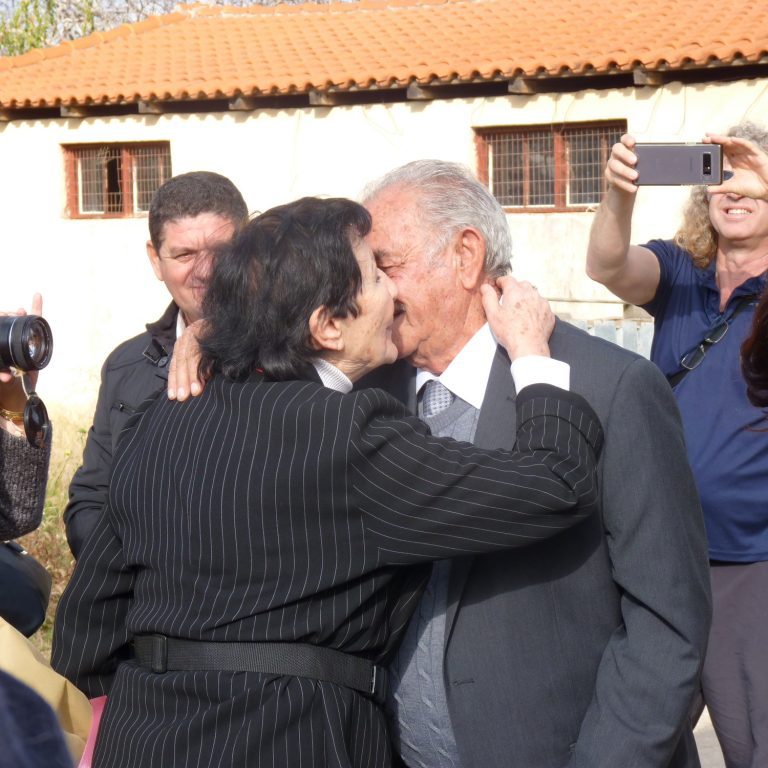