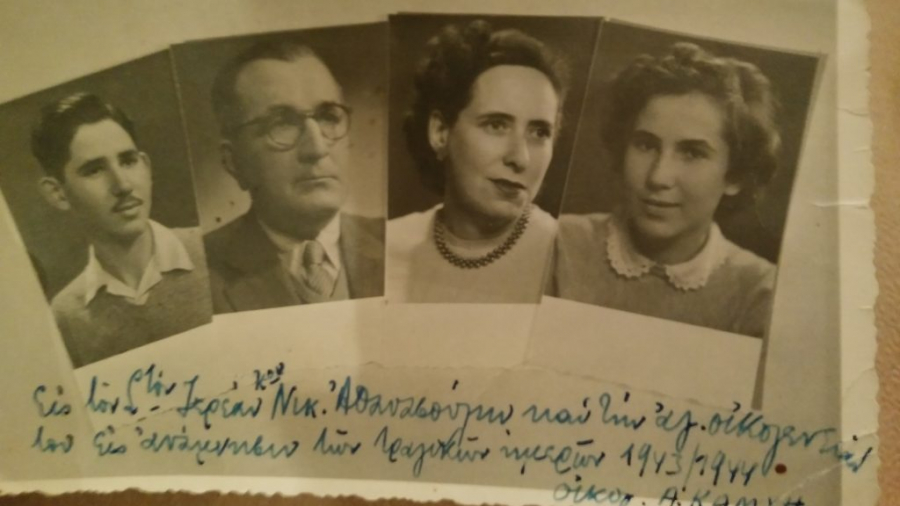 A lot of descriptions have been written about hell. It usually has a huge crematoria and cruel angels who carry out their plot. But when Rivka Kamhi-Jakobi (81) describes the hell she experienced as a child in World War II in Greece, she describes it as a place where many good souls can be found.

Rivka was born in Athens to the Kamhi family. In 1943, when she was a 6-year-old, the Germans occupied the city (under Italian occupation at the time) and her life was turned upside down in an instant. She grew up in a wealthy home, as a spoiled child, with a maid who took off her father’s shoes when he returned from work. But all of a suden, she had to flee with her family in a horse-drawn cart to a village where there was no electricity and running water. There they hid until the end of the occupation, living a life of austerity under a false identity, fully relying on the kindness of the locals.

When Rivka thinks about her past, memories come back to her in flashes. “One thing that I remember is that, during the Italian rule, even before the German occupation, there was a severe famine in Athens. My mother, who was in the first weeks of pregnancy, went to fetch a pasta machine from the neighbor. Drugs were also hard to find, as most of them were sent to the front. The baby was a miracle for the family, however they worried, ‘What if he gets ill and they have no medicine?’ It would be very hard to hide him in a cave without being caught.“

“I always wondered what I would have done, if I were a mother during the Holocaust. How would I breastfeed my baby? All mothers with infants shared the same worries: Where to hide the baby if war broke out and how to calm him down if he started crying while in hiding.”

How it all started…

“I remember when I went with my mother and brother to a resort, as we did every year. It was November 1943. My father also joined us for the weekend. Then suddenly, our parents told us we needed to flee to a village. We went at once, horseback on a steep ascent, on an unpaved road. To this day, I do not understand how the horse managed to climb that path. We arrived at a small house in the village, at two in the morning: me, my parents (Avraham and Shulamit), my grandparents (Yechiel and Rivka), my brother Yechiel, who was two years older than me and uncle Rafael. As we arrived, people to whom we were complete strangers opened their doors to us. They invited us in to have supper together, in their little house, as if it were the most natural thing in the world.”

For years, Rivka Jakobi continued to talk about these memories from her childhood. At first, she told these memories to her own children as if they were mere fairy tales, bedtime stories. When they grew up, however, they started inviting her to school during the Holocaust Day, to share her story once again. To this day she sees it as her mission to let world know about the heroism of the good villagers and the lessons she drew from them about life.

“Whenever the Germans raided the village, the partisans would ring the church bells and send one of the children to take us to a cave in the mountains. The children would cover the cave entrance with branches, so we would not be exposed. I do not remember trauma, I do not remember fear. Only the piece of sky shining blue through the tree branches.”

Pastor Athanasoulis & Life in the village

“On the Sunday after we arrived, my father went to church because we had Christian certificates. The pastor, Nikolaos Athanasoulis, asked him to get out for a while. My father went out, but remained behind the door. He heard the priest say to the people, “Everyone knows that a family from Athens came to the village. They say they are Christians, but we all know they are not. The Germans will come and will offer you a bag of sugar or flour to betray this family. I warn you, if anyone talks about them, I will burn your house down. There will be no informants in my village!“

The current pastor, Panagiotis Theodorou, hears the story for the first time and the excitement on his face is evident.

“The spirit of the priest remains in the village to this day. Every stranger who comes here is embraced. The Albanians were also given food, clothes and a place to sleep.”

The pastor also served as the village teacher. Rivka remembers how he vacated the worship chairs after Sunday prayers and put small chairs instead, to teach the multi-age class, since the school building was used by the partisans. Rivka and her brother joined the makeshift class. She sat with the toddlers, in the front rows, and Yechiel sat a little behind her. The pastor adjusted the lessons according to the age and level of knowledge of the students.

“One day, after school, the pastor left and all children remained alone. Suddenly everyone surrounded my brother Yechiel, took a glass bottle and threatened him:

‘We will kill you, just like you killed Jesus.’

“I was standing there petrified. I did not know what to do. One child ran to the priest and told him what was happening. The priest came and put side by side the child who fetched him and the children who were threatening my brother and said: ‘These are the bad children, this is the good boy.’ His message was clear and sharp and everyone understood it.“

Father Athanasoulis had ten children. His youngest daughter, now 97, could not attend the ceremony, but his grandchildren came to receive the award in his name. One of them is Aliki Athanasouli (79), who met Rivka again during her visit to Kryoneri after 74 years. “We were real friends,” she said. “I remember we played together. My grandfather told us, ‘You have to take care of this family.’

“You were part of our family. One day, your brother Yechiel felt sick. You had to flee to the cave, but my mother told your mother to leave him with us. My father was also sick, so they lay together in bed. Then my mother told me to call Yechiel ‘my brother.’ When the Germans arrived, they asked my mother: “Who is this boy?”. She replied: ‘My son.’”

A book for posterity

Avi Jakobi (57), the eldest son, wrote a book six years ago about his family, with his brother Ido, which included some of his mother’s stories.

“As kids these stories were romanticised. Only now, when we’re here and meet with the people, can I truly understand the risk they took on for us. I try to imagine my grandmother living with the mothers of the women who are now present here. It surprises me to find out how important our story is to them. It is a part of them, no less than it is a part of me.”