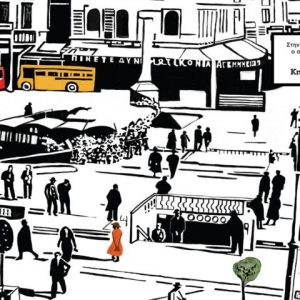 The great illustrations by Hara Marantidou add emotion to the narrative. It is an exemplary conversation between text and image. The overall result is a Greek book for children that has all the makings of an international career.

“I loved going to that school with the saints, looking at us from the pictures hanging on the walls. Everyone loved Father Athanasoulis and listened to him because he was very good. One day, after class, some of the older boys grabbed my brother and put him in the middle. A boy holding a broken bottle shouted at him, “You killed our Christ!” The priest found out and punished them.”

In the story of the Jewish girl Rebecca, who became Koula during the Occupation and, with the help of EAM, hid with her family in the village of Matsani (today Kryoneri) in Corinthia, everything fits. The peaceful osmosis between cultures and solidarity, brutality and fear, the family bond and racist bullying, self-denial and risk-taking. Not a few months have passed since I was wondering, writing here about an excellent foreign-language Holocaust martyrdom book (“The Boy from Buchenwald” by Robbie Weisman, Pataki Publications), when we will finally have children’s and teenage books based on Greek-Jewish stories from the Occupation (and not only!).

And here is my expectation fulfilled in the best possible way.

Rebecca-Koula, now over 80 years old, a permanent resident of Israel with children and grandchildren, is a cousin of Decastro and lends her story to her. Marantidou’s great illustrations add to the emotion and drama that the low tone of the wise, short narrative holds beneath the author’s lines. It is an exemplary conversation between text and image. The overall result is a Greek book for children that has all the makings of an international career.

A Jewish family with two young children, then aged about 7 and 9, is rescued from occupied Athens in 1943. A shanty village with tiled houses, without running water and electricity, welcomes the Jews and hides them.

The village priest takes the matter upon himself in his Sunday sermon: “When the Germans come, anyone can raise their hand and say that there are Jews hiding here. The Germans may give him money, they may not hurt him, but I, your priest, will burn his house and drive him out of the village. Because there are no traitors in our village”.

“A shepherd, then, who knew how to manage both the good and the wild, became the guardian angel of the irreligious fugitives. Decastro has the good idea of interpolating the words of the alien children of the village of Matsani into Rebecca-Koula’s words. This is effective staging, as the reader makes the comparison on his own and forms on his own initiative the complete picture from the pieces of the multi-faceted mnemonic puzzle. Here the author seems to make use of oral testimonies.

From the reference at the end of the book we assume that the testimonies come from the relevant archive of the Corinthian organisation Filoxenia, which is now based in the same village and is active in the field of culture and the environment. So this is why words are not only the children of many people, but also of a combination of modern infrastructure and good practices. Who would have expected, a few years ago, such performance starting from the mountainous Peloponnese? The descendants of Father Athanasoulis, and of the Dimopoulou family who hosted Rebecca-Koula, her brother and parents, were later honored by Yad Vashem, the International Holocaust Remembrance Center based in Jerusalem.

After reading the book, I walked to the building at number 10 Athinas Street, a modern building with no taste. This is where once, at the beginning of history, the pre-war apartment building that the Kamhi family abandoned when they fled to Matsani would have been located. In this way, I think, the city is given its true face. From now on, the readers of this book, walking in Monastiraki or passing the Isthmus or climbing the mountains of Corinth, will recall a certain past, which will no longer be a ghost. And his people.

Mariza Decastro studied Pedagogy at the Sorbonne and Literature for Children and Young People. She taught History and Literature to primary school students in private schools. Furthermore she writes Knowledge books for children in the fields of history and art, and translates literature for young people and adults.

Since 1998 she has been involved in the review of children’s and teenage books in print and online
periodically.
Her books have been honoured with the State Knowledge Book Award (2006, 2018, 2019), the IBBY-Hellenic Book of Knowledge Award Department (2012, 2016, 2021) and the Youth Translation Award (2012, 2016, 2021) Book Award of the Hellenic Society of Literature Translators (2014).
Her works are included in the White Ravens 2017 catalogue and 2018 of the Munich Youth Library.
Plus that her books are also published by Kaleidoscope Publications:
A world in motion (National Knowledge Book Award 2018) and in the market of Ancient Athens.

Hara Marantidou is an artist, designer and architect.
She is a graduate of the School of Architecture of NTUA and
of the Athens School of Fine Arts.
She believes everything is interesting as long as you look at it up close. In all her works she tries to tell stories through the combination of image, text, objects and also through space, materials, sound and everything that can be combined to enrich the experience of storytelling.
Marantidou made Design exhibitions, educational material, museum products, special crafts, activities for children and adults, books and objects for many different institutions such as: the Museum of Cycladic Art, the Stavros Niarchos Foundation Cultural Centre (SNFCC), the Olympic Museum of Athens, the Coin Collection of the Athens ALPHA BANK, the Kapodistrias Museum in Corfu, the Museum Greek Folk Musical Instruments, and other cultural institutions and education.
She has also illustrated books for Kaleidoscope Publications: Man or violin? (Honorary distinction The Reader 2013)
and The Complaining Mako.

(Βiographies were extracted from Kaleidoscope Publications)